One day in Casablanca

Located on the Atlantic coast and surrounded by the plain of the Chawiya, Casablanca enjoys a magnificent climate tempered all year. With a cosmopolitan and westernized environment, it is the modern face of modern Morocco. 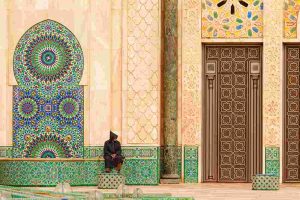 Discover the Hassan II Mosque, the only one in North Africa that is allowed access by non-Muslims, only with guided tours. The Mosque is built on the seashore near the Medina of Casablanca and on top of its minaret there is a laser beam pointing in the direction of Mecca.

The interior is splendid: 76 pillars hold a gigantic ceiling in painted cedar, which can be opened, allowing the sky to be reflected in the water of the patio.

All that’s left now is to wait for the dusk on its outer terrace and to observe how the sun meets the sea. 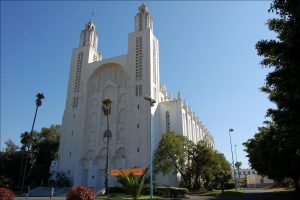 Or, visit the cathedral of Notre Dame de Lourdes in Casablanca. Built in 1954 by the French, Notre-Dame-de-Lourdes Church is one of the few places of Catholic worship in a predominantly Muslim country.

From the outside, the church is nothing special to discover, but once inside, its architectural artifact will immediately capture the visitor’s attention, but what can effectively take your breath away is the stained glass windows.

More than 800 square meters of stained glass are offered to the eyes of visitors amazed. Directed by Gabriel Loire, one of the greatest French glassmakers, they are distinguished by finely worked details and a plethora of colors.

Then stroll through the Corniche, which offers several kilometers a beautiful panorama of the Atlantic Ocean and has several cafes, ideal to have a snack at any time of the day and rest while enjoying the sea breeze. 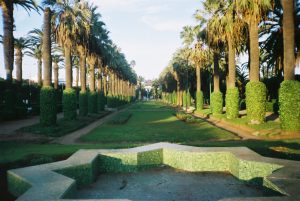 Head to the “Parc de la Ligue arab” where you can try the wonderful Moroccan pastries. Superb park in the middle of Casablanca, near the city center, between Mohamed V Square and Hassan II Boulevard. The beautiful date palms were built in 1918 forming huge paths where successive pergolas, arcades, green spaces. If you are a connoisseur, you will discover many different varieties of trees, flora and fauna. Many cafes with terraces are adjacent, allowing you to drink in a unique setting in the city. 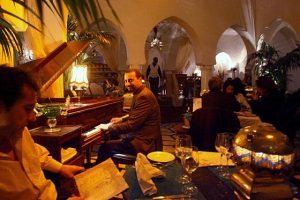 The day ends with a view of Rick’s Café, a piano-café that recreates the movie Casablanca. The classic film “Casablanca” was not filmed in Morocco but, nevertheless, the tourists look for everything that is connected to the film. Rick’s Café came out in 2004 to give life to the film immortalized by Humphrey Bogart and Ingrid Bergman.

On the outside, it looks like an ordinary Moroccan building, but inside, the decor is exquisite. It has a romantic feel, and the piano in the corner, as well as the  playroom (they have cards and other games available) have not been forgotten. And, of course, “Time goes by” is one of the songs that you will definitely hear.

In one of the rooms, the movie is always on a television. For those who have never seen, it is perhaps the best place to do it … with all the classic surroundings.