Culture and Tradition of Morocco

Want to know if Morocco’s Islamic Ramadan will affect your trip to Morocco? Let’s take a look at Ramadan in Morocco.

The time of Ramadan?

The  Ramadan  is the month in which Muslims practice fasting (Arabic: رمضان). Each year, the date of Ramadan is shifted and falls on the 9th month of the Muslim lunar calendar and each year is about 10 days earlier than the previous year. Here is the calendar of Ramadan from 2017-2027:

The Ramadan, one of the most venerated months in all Muslim-majority countries such as Morocco , requires strict observance of fasting. Its sacred character is based on the tradition already established in the Koran, that in this month the Prophet Mohammad received the revelation of the Koran by the archangel Gabriel “as a guide for men of right direction and salvation”.

As the first rays of the morning sun shine, the faithful Muslims embark on a strict fasting in eating, drinking and sexual life. With the sunset, the bans recede. And in the entire holy month of Ramadan, when a Muslim zealously practices prayer, turns to Allah for blessings, he is never so close to God as in these days.

Fasting is one of the five pillars of Islamic faith. The others are to be charitable to the poor, the word of the Quoran, recitation of the five prayers, and the pilgrimage to Mecca.

It is a special and very important time in the life of every believer. This is not only a limitation of oneself in food, but also a time to do good deeds and become closer to the Almighty.

What would Muslims do or not do during Ramadan?

During the month of Ramadan , Muslims must abstain from drinking, eating, smoking from dawn to dusk. Any person who suffers from disease or is travelling do not participate in Ramadan, , but it is expected that they can make up later and do the fasting in another time of the year.

Children are not required to fast until they reach the age of puberty. As children grow up and learn about their religion, some parents would keep their children fasting for a few hours a day. Children often start the first day of fasting of their lives at Laylat al-Qadr, which can be translated as “Night of Decree”,  “Night of Power”, “Night of Value”, “Night of Destiny”, or Night of Measures,. This is  a special night of prayer, usually the twenty-seventh night of Ramadan in Moroccan culture.

It is the holy month dedicated to prayer, meditation and self-discipline.

Since the purpose of the devotion is to purify oneself from all the corrupt material that exists in the corruptible world, and to do only good deeds, smoking, swearing are also forbidden.

The spiritual significance of fasting has many interpretations. It is attributed to the ability to teach man self-discipline, belonging to a community, patience and love for God. Another interpretation is that fasting and sexual abstinence for a whole month remind the practitioner of the deprivation of the poor.

Is it a good idea to travel to Morocco during Ramadan?

The countries of the Muslim world do not impose their way of life on anyone, so you will not notice any serious differences from ordinary days. No problem to eat and drink in the day. Just stay discreet!

But still, daily life during Ramadan freezes, and the working day is much shorter, as most Muslims stay home during the usual lunch time to sleep and spend time with family and friends. All tourist destinations and facilities will operate as usual. Some restaurants, bars and coffee houses will close in the morning and afternoon and begin to work in the evening.

Everyday life resumes after the breaking of the fast, and the evening meal will be taken around midnight. In cities like Marrakech, shops stay open until 2am. The nightlife largely compensates for the tranquility of the day. Contrary to the rest of the year, the medinas are full of life during the night, since a significant number of people stay awake all night.

The best time of Ramadan is the evening meal that brings everyone together with a varied assortment of sweet and savory treats. You will often be invited to eat at other’s people homes and the guest / host traditions are even sharper at this period. It’s a moment of conviviality and relaxation, and an opportunity to take part in Moroccan life. The ftour is often delicious, with special recipes, breads baked with spices, honey pastries.

Going through this special month in a Muslim environment will give you more respect for their religious beliefs, and you will experience the culture beyond what you can read in books. So do not deprive yourself of traveling to Morocco during Ramadan. It’s a great opportunity to experience Muslim culture.

When the sun sets, the cannon shots are heard, the fast is broken. Tradition has it that can eat a date because that was what the Prophet did. Alternatively, you can drink a glass of water. Then follows the evening meal ( iftar ).

The meal is usually done together, often right on the street: they lay the tables, singing in the light of the night lamps, which in the Qur’an are called days of kindness, generosity and hospitality.

Since it’s also a month of fraternity and charity. During the time, food prepared in abundance is shared with those who need it. Mosques distribute couscous in the evening; They invite each other and share… Even if you are only visiting, you will feel this atmosphere.

What you should pay attention to:

Whether go to Morocco during Ramadan or not depends on you, even though it will, to a certain extent change your holiday, it would still be a very rich unique cultural experience. 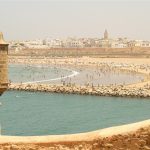 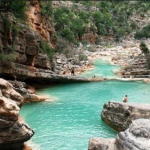 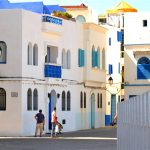 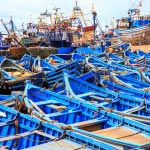 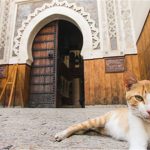